Thought this one sums it all up! 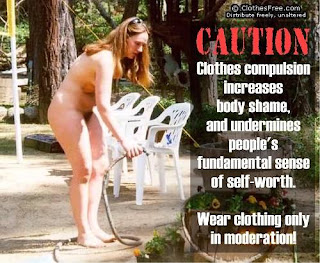 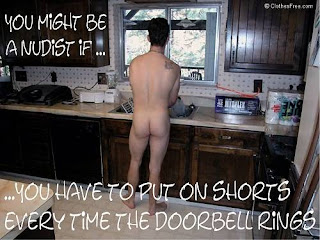 Mmm...
Had to grab some shorts when the Pizza man arrived tonight.
But I'm in no doubt, I am a Nudist!

Professor Doug Booth, author of Australian Beach Cultures: the history of sun, sand, and surf, said the utopian ideas surrounding public nudity, and particularly nude bathing, held by young baby boomers have been thoroughly rejected by their offspring. Even Speedos are now considered indecent.
In the past 10 years he had noticed ''a remarkable conservatism which reveals itself in attitudes towards bathing costumes''. ''I think it's a combination of social hysteria around paedophilia and a fear of technology and what technology can do now,'' he said.
Even a statue of a naked child on the beach can cause angst and have to be covered, as happened with an entry in last year's Sculpture by the Sea exhibition.

Mr [Bob] Reed conceded in this climate, the movement was having trouble attracting new recruits. 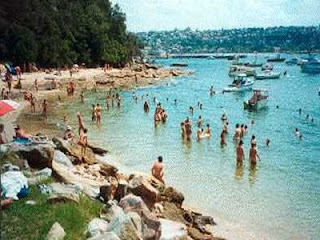 On many different naturist forums there are postings asking "Where are all the young people?"

One of the most sensible responses that I have heard comes from Stéphane Deschênes* owner of Bare Oaks Family Naturist Park  in Canada, who reminds us that the young 20 somethings make up but a small part of the population so they may well be represented in appropriate numbers based simply on this point alone. Second it is normally when people are in their 30's with some stability that the naturist lifestyle becomes more attractive and affordable. *see link to Naturist Living Show

So don't close the lid on the coffin just yet!

From my experience at Cobblers Beach, our "clothes optional beach", I have observed a good mix of ages. On any given weekend you will see a good cross section of the population from 20 somethings to 80 year olds.

Yes the majority of people are in their 40's and 50's just like in the general population. The really great thing about our local beach is that we do have families come down regularly and the whole beach has a real family friendly atmosphere.

Are all these people naturists or are they "skinny dippers"? To me it does not matter yesterdays skinny dipper can be tomorrows naturist.

If the popular press is to be believed the younger generations are environmentally aware what better entrée to the naturist movement if only they can break the bonds of the body-image demons.

As they say in the classics time will tell.

VIDEO: Naughty nudes
Click above link for the video report of this article. 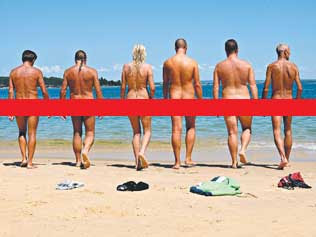 At Little Congwong Beach at La Perouse nudists who frequent the picturesque beach on the northern edge of Botany Bay have become the subject of a National Parks and Wildlife crackdown.

Little Congwong has been an unofficial haven for naturists for 50 years. However, complaints from some locals saw police raid the beach on Sunday and threaten nude bathers with fines. On 22 February, the sun lovers were defiant, returning to the beach despite warning signs and the police raid according to Chelsea White of The Daily Telegraph.

It really makes me wonder about our current society and what makes the sight of the naked body so threatening!

The beach in question is isolated and has a traditional use by naturists, granted it does not have legal status as a nude beach but with the small number of legal nude beaches within the Sydney area (3) you would think that the government and local council would create another one.

If there is overt sexual activity undertaken by members of the public then bring the full force of the law onto them and allow the genuine naturists enjoy the environment in a natural state.

Posted by Sunkissed at 5:17 PM No comments: 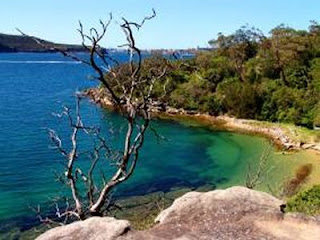 This blog will capture the irregular posts of Sunkissed an Australian Naturist couple as we continue to explore the naturist lifestyle and the questions and experiences that arise.

Although I may speak in the singular at times in this blog the recorded comments will be reflective of our shared views, questions and observations.

We have been attracted to this lifestyle by the freedom found in removing the clothes and with them the self imposed and society imposed repression and stress that we have carried around with us for so long. We also wish to explore and gain an understanding of the philosophy and history of naturism. To this end there are a great many sources of information on the Web and as we explore these we will endeavour to note our discoveries here in our blog.


This blog has also been brought about by the excellent blogs that I have read and this has encouraged me to try my hand and to add in some small way to the body of knowledge available on this highly beneficial life style.


I therefore have provided links to those blogs that I have found particularly interesting and helpful in the panel to the right.

Posted by Sunkissed at 2:43 PM No comments: