In listening to Stéphane Deschenes’ Naturist Living Show on the topic of the sexploitation films of the 30's, 40's, 50's and 60's he had an informative interview with Mark Storey author of Cinema au Naturel a comprehensive genre study analyzes both the good and the bad in nudist film and video from the 1930's to the present.
I decided to try and track down Mark's book on the subject. Unfortunately it is out of print however there are a number of websites out there that talk about the era of the Nudist films. 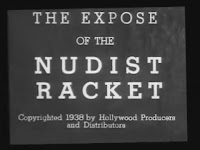 In the 1938 film “The Nudist Racket”, some excerpts appear in  right margin of this blog, the commentary is so politically incorrect that it makes a modern viewer cringe as the voice-over makes fun of a larger woman with low brow, school boy humour. The antithesis of the Naturist view of body acceptance.


There is no doubt that the majority of these films were simply "skin flicks" dressed up as documentaries on the nudist lifestyle.
In the 50’s and 60’s the “nudist camp” was the excuse to show large amounts of attractive female flesh woven around a weak and predictable storyline.

Today they are a cultural curiosity and a window into a bygone age. Particularly looking at the club facilities that were in use at the time. 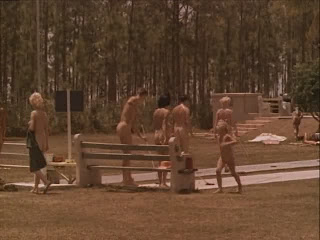 The characteristics of these films are that more often than not they are shot on location at an exotic nudist facility, usually Florida or Miami, with overcast skies. This is due to the fact that they were almost always shot in winter. 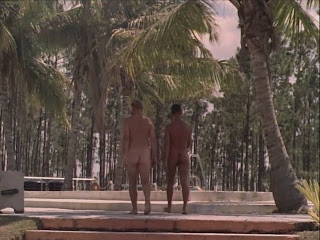 The other interesting observation is that the "nudists" almost all have strong tan lines and it is obvious that they are have not been exposed to "all over" tanning. The volley ball matches in the earlier films are always interesting to watch due to the fact that they could not show the hint of genitals so the team facing the camera would be wearing shorts! Likewise around the pool everyone  would carry something, a magazine, a hat or a strategically placed towel. 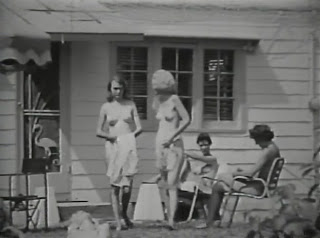 As anyone knows who have visited a naturist/nudist resort towels are often carried but to sit on rather than for any other purpose but in these films although carried they are rarely used for this purpose. It has been an interesting diversion to look into this period of film making and I wonder how many converts to nudism these films produced. I would guess very few for while they carried a pro-nudist lifestyle message they were obviously voyeuristic in nature.

Posted by Sunkissed at 10:47 PM No comments: