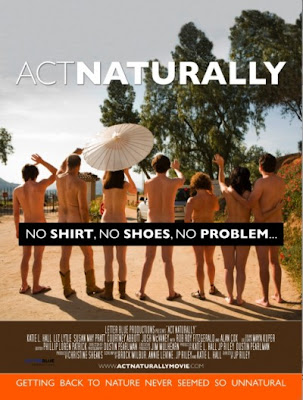 "Getting back to nature never seemed so unnatural."

This independently produced film directed and co-written by J.P. Riley, it has won accolades in a number of independent film festivals and because of the positive promotion of the Naturist lifestyle it has found a supporter base in the Naturist community.Following a number of successful independent screenings including selected clothing optional cinema sessions. I first heard about this film through an interview of J.P. Riley by Stephane Deschenes on the Naturist Living Show.

Having just watched the pre-theatrical release DVD, which is intended to raise funds to assist the recovery of production costs and to produce a print for theatrical release, I can say that my wife and I enjoyed the film and agree that the overall the Naturist lifestyle is portrayed in a very positive light.

The majority of the film is set in the fictional Bare Lakes Nudist Resort and the story is told through the eyes of the two daughters who are both confirmed "textiles". There are very few "cringe" points and a lot of humour as a Naturist viewer. There is sexual relationship intimated, it is of course not shown, however it is within the storyline so there is no connection between the social nudity and the sex.

This film is fun and well worth the viewing, it is a pity that it has not been picked up for commercial release because it would stimulate discussion about social nudity and perhaps encourage the 30'something demographic, for whom it will have great appeal, to try social nudity.

Also there is a strong body acceptance message in the film which, for me, was the best naturist message to come through.

All in all, this is the best film depicting the lifestyle to date.

If you wish to purchase the Act Naturally DVD and check it out for yourself, you can do so at the official website at ActNaturallyMovie.com


Please support this independent naturist film by purchasing your own copy of this movie instead of duplicating it or downloading it.