Back in March I asked the question - What is it about genitals?

I commented at the time that  I had read with shock the increasing number of women that were having plastic surgery to "shape" their labia as they feel self conscious about labia that are perceived as being overly large.

With the lack of opportunity for people to see each other naked and therefore witness the great variation of our anatomy, both male and female, people may well see there own genitals as not "normal".

This program should be required viewing for young women and a salient warning of the damage that our society's body taboo has on the populous.

A beautiful day in the city.


Today was a beautiful day in Sydney, so I went to Hyde Park at lunchtime to catch some sun. I had a report to read and to comment upon so I took that with me. As I sat down at the base of one of the statues to work I decided, as it was so warm, to remove my shirt.

It is legal for me to do so , unlike the other 50% of society as we still do not allow women to go top free in this state. 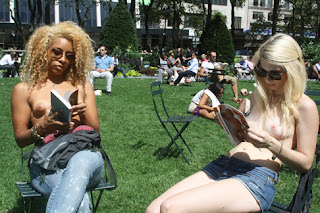 Well after removing my shirt and enjoying the sun on my body I started to notice that I was starting to notice a number of people walking across the park looking in my direction and I got a distinct impression from their facial features that they did not approve!

If only they knew that I was really wanting to remove the rest of my clothing!

This started me thinking are we really so prudish in this society, a society that previously defined itself by its beach culture. What has happened to the bronze Aussie?

Giving this some further thought perhaps it was just because I was in business attire although looking around there were plenty of people in the park in shorts and T shirts but I was the only one who had taken his shirt off?

One thing that this experience has reinforced is that women are still bound by 19th century restrictions and that the "Top Free" movement that operates in the States and elsewhere in the world should open a chapter here. 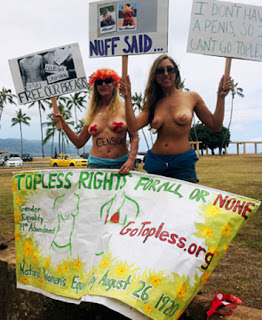 As in parts of Canada and the USA where women have won the right to go top free not every women will use that right, it but at least they have a choice.

This photo shows how stupid such discrimination really is.... 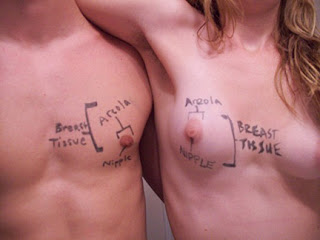 Well that's my rant for today and yes if it is another beautiful day tomorrow I will be heading back to the park and removing my shirt if I so feel like it.