I have been reading “Naked Fear” by Dennis Craig Smith and in one chapter called Modesty Madness he cites this example of what he describes as the paradox that society has regarding the body and sexuality.
In August 1991 Demi Moore posed pregnant and naked on the cover of Vanity Fair. Although nude the photo was taken with only a side view of hips and legs and her stomach and she held her hands across her nipples.
In America the picture caused such a reaction that in most places it was displayed with a strip of white paper across the cover. Interestingly at that time it was the magazines biggest selling issue ever! 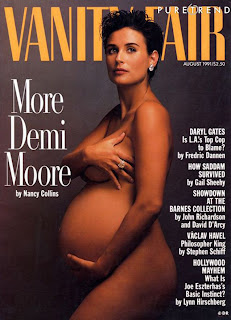 Twelve months later Demi again graced the cover of Vanity Fair naked and facing the camera. No outcry was heard, Why?
Well in the second shot Demi had a suit body painted on and although with a little careful observation you can clearly see her nipples  there was an “illusion of modesty … and the public was protected by its own imagination from viewing a naked body”. 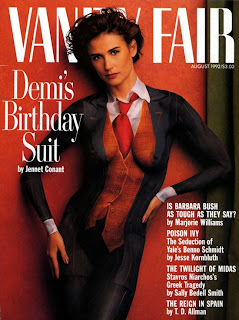 Dennis Craig Smith then poses the question, “What does it say about the attitudes toward decency if a person who is actually nude is considered dressed because we perceive him to be? If decency cam be illusive, and if we can be fooled into a false sense of acceptability, then could it not be  that the concept of decency itself is an illusion?
The anti-body campaigners have and continue to work this illusion, proclaiming the human body as "dirty" and "evil" when in truth it is a perfect and amazing instrument for our use.