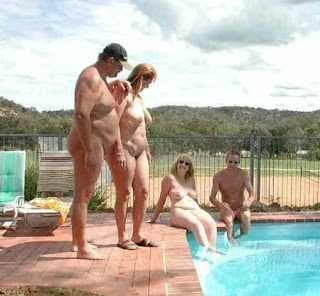 As latecomers to the Naturist lifestyle we wondered if there was a trend of people discovering Naturism later in life?
In our case we discovered the freedom of being clothes-free when I happened to see a reference to our local clothing-optional beach on a map. This prompted some further investigation on the web and finally a visit, with a certain amount of anxiety I must say, and finally that wonderful moment where I shed my physical clothing and a whole lot of psychological stuff as well!


This experience was so potent that on my arrival home I was beaming and my wife was keen to experience my newfound freedom for herself. So having found a family friendly beach we set off.


She did say that she probably would only go topless but on arrival and after removing her top, I asked if she felt over dressed and she nodded and removed the rest of her clothes.
A short time later and we were enjoying the ocean as God intended.


We had some holidays planned shortly there after and I found a small cottage in the Byron Bay hinterland that was noted as nudist friendly due to it's private location. 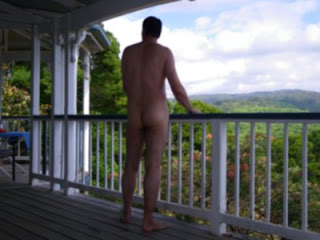 So having booked the cottage we then needed a stop over and we selected a naturist B&B (Sylvan Glade) at Bowraville as our first experience of social nudism in a non-beach setting.
As it turned out we were the only ones staying at the B&B so it was a nice gentle introduction, made even easier by our hosts. 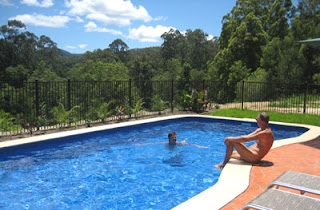 Sylvan Glade Pool
On our return we planned to break up our trip by stopping a couple of days at Bowraville and the 3 days at a new naturist B&B (Le Chateau) at Port Stephens.

This was where we met and spent time with a number of like-minded couples in a nudist environment. The thing we noticed about these experiences was the total acceptance and genuine friendship offered both by the hosts and the other guests that allowed us to be comfortable with who we were. 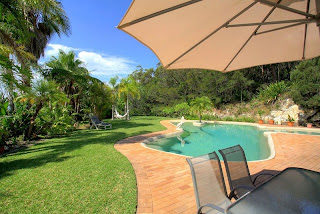 Le Chateau
Returning home we continued to attend our local clothing-optional beach and as regulars over time, we have got to know some wonderful people.

The interesting thing is that a lot of the people we have met are in their mid 40s to mid 50s. Some have been involved in the lifestyle for many years others like ourselves are relatively new.

I read with interest a posting to one of the Naturist online forums where a woman involved in the lifestyle made the suggestion that women on reaching 40+ reach a point where they feel a lot less pressure to conform to the airbrushed ideals of the fashion magazines. If they can start to find an easy acceptance of their bodies then armed with this mindset they are ready to discover the full liberation of Naturism.


We have met a few families and they are bringing up their children in the naturist environment. But I would imagine it will become more difficult as the children grow and demands on their time will be increased.


Hence, we have heard of people leaving the lifestyle that they had discovered in their 20's & 30's, only to pick it up again when the children had grown up. 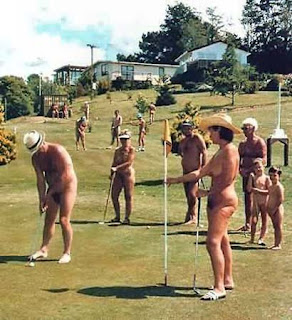 The last group of late adopters are the grey nomads, retired now, mobile and chasing the sun. These may have been part of the counter-revolution of the late 60s and 70s traveling from nudist resort to nudist resort in their caravans and mobile homes.


So now in our 50's we could be part of a growing trend that may see a strong revival of people looking for more opportunities for social nudity whether at a beach, resort type facility or traditional club.

Posted by Sunkissed at 2:53 PM No comments: Links to this post 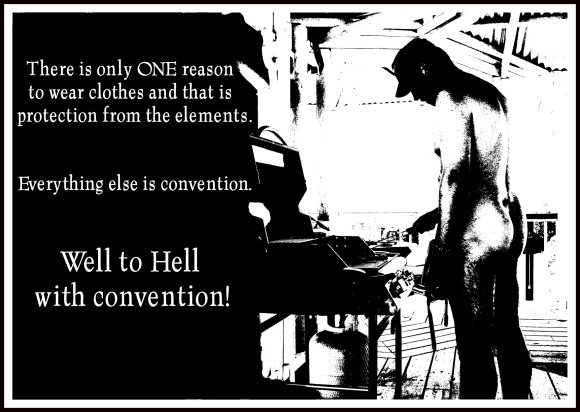 Posted by Sunkissed at 11:48 PM No comments: Links to this post 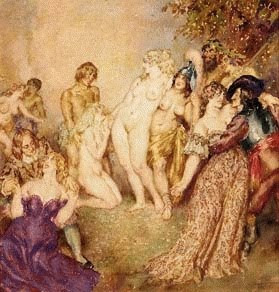 Our Lost Olympus 1931 - Norman Lindsay
The term "Wowser" was frequently used by artist and author Norman Lindsay, who fought many battles with "Wowsers" over the so called "sexual content" in his art and writing.


'Wowser: an ineffably pious person who mistakes this world for a penitentiary and himself for a warder'.
Normal Lindsay (1879 – 1969) was arguably one of Australia's greatest and prolific artists, as an illustrator in pen and ink as well as a painter in water colours and later in oils. He also etched copper plates with intrinsic details and subtle shadings that was an equal to any of the European masters. In this he was ably assisted by his wife Rose who physically printed the images using a large press and provided quality control to ensure that the images were all clear and a perfect representaion of Normals work. Around 50 images only would be made from each plate.

All this plus over 12 fiction and non-fiction books, garden sculptures that were for his own amusement comprising his favourite subject the naked female form.

And that is where the wowsers stepped in although highly popular and successful during his life Norman Lindsay's work was constantly under attack. Not only did his subjects appear naked but he also depicted pubic hair! 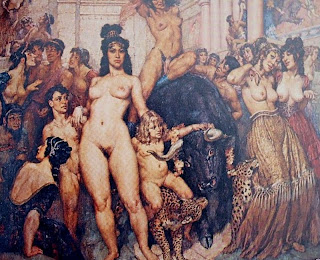 Crete
Art publications that carried his images were considered obscene in some circles and the publishers were even raided by the police. Although never arrested himself he was often concerned about the possibility.
From the late 1800's through to the 1960's he saw moral attitudes change, albeit very slowly, but even in the late 1960's Australia was only just coming to grips with the issue of nudity. Local Nudist magazine Solar was still re-touching photos it was not until 1971 that Solar and The New Zealand Naturist was able to show nude full frontal photographs. The wowsers had been silenced or at least slowed down.
Of course in the 1970's as the Free Beach movement gained momentum we saw the rise of the conservative wowser element again. 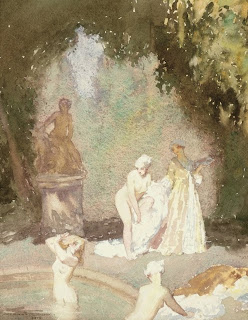 Nymphs Bathing in a Forest Pond 1919
It seems that the Australian population has still has a wowser element that ebbs & flows in strength. The culture has been open to increased graphical violence, legalisation of pornography, blatant sexual imagery in advertising and yet the issue of wholesome social nudism is still a major issue for the wowser element.
Magnus Clarke in his work Nudism in Australia talks of the incomplete metamorphosis in Australia about the acceptance of nudity he says "there are still individuals for whom the body is a mysterious and unexplored expanse of flesh which hangs from their necks. Given that they have managed to ignore it for so many years the probability that they will now do otherwise is slight." These are the wowsers!

Posted by Sunkissed at 12:16 AM No comments: Links to this post