The Price of "Beach" Is Eternal Vigilance. 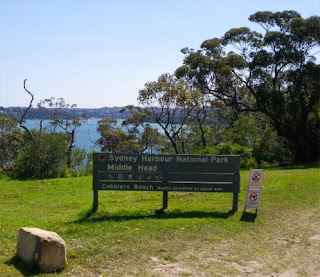 I have adapted this well-known truism to the ongoing vigilance required to protect the clothing optional beaches that Sydney now enjoys.

As we have seen in recent times Sydney’s Mosman Council has again petitioned the State government opposition to revoke the clothing optional status of both Cobblers and Obelisk beaches when they get into power after the state election next year.

The Mosman Daily, local newspaper, has been reporting the debate and on their website they have invited public comment. The overwhelming responses were from supporters of retaining the current status of these two beaches. This was no doubt as a result of  a call to action that went out on Naturist websites.

The attack on the beaches was a thinly veiled effort with the thrust of the argument running along the line that there was an increase in antisocial behaviour, because of the beaches clothing optional status. This antisocial behaviour, largely anecdotal, revolved around acts of public sex in a nearby bushland and “strange” men loitering around the nearby oval and public toilets. It was also noted that he area around Obelisk Beach has been referred to as a “Gay Beat” on some Gay websites.

As one Naturist observed this position makes as much sense as banning cars to stop drunk drivers!

This is the same type of campaign that the previous Mayor of Mosman started to run the 2007.

The situation is that the beaches were enacted by state government legislation and therefore the zoning was taken out of the control of the local council. So in order to change the legal status of the beaches. A motion would need to be put to State Parliament, and then passed to amend section 633 of the local government act.

It was pleasing to note that the opposition local member made the following public statement in the Mosman Daily:

North Shore State Liberal MP Jillian Skinner said she would not push for legislative change to outlaw nude bathing at Obelisk and Cobblers until she got word from police that lewd activity in nearby areas had become a major problem.


“If I get strong lobbying from the police, residents and the council who are genuinely concerned about illicit acts occurring near these beaches I will lobby for it,” Mrs Skinner said.


“I don’t condone that behaviour, it’s very worrying ... but at this stage I haven’t heard from many people.”

Don't let the statement fool you, Mosman Council will continue to lobby State politicians to try and have the clothing optional status of our beaches removed.

I would urge all Naturists to write to their local member of Parliament in support of the maintenance of, not only these two clothing optional beaches, but of all beaches that are designated clothing optional in the State.

The last thing that we can underestimate is the power of the “wowser” element within our society.

Jillian Skinner, has made it clear that she is looking for feedback from the community before taking a position on this matter. So I would encourage you, if you have an interest in maintaining these beaches, to write, e-mail, or call your local member and make your position known. 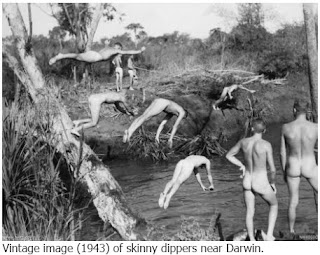 I have recently obtained a copy of Magnus Clarke’s book Nudism in Australia, which was published in 1982 as a scholarly work exploring Nudism as it was in Australia from its early days through to what was then the present day (1982).
I am finding this book interesting on a number of counts, firstly I have memories of Australian society growing up in the 60’s through to the early eighties so I can relate to the times referred to. I also am finding interesting the history of the movement, which was brought to Australia, like so many aspects of society, initially from England and then later influenced by the European immigrants.
I also find it interesting that the movement has had some difficulty in developing an underlying philosophy, particularly as I tend to think in these terms and relate to some of the aspects of my experience of the lifestyle in more philosophic terms.
Here is a quote from an Australian Nudist Magazine – “The Australian Sunbather” that opened each issue between 1949-50 with this “creed” one can see how the movement is trying to articulate the common ground that all nudists share. Without doubt it is also a statement for the public at large to show the wholesomeness of the movement to counter the sensational accounts of social nudism in the popular press at the time. 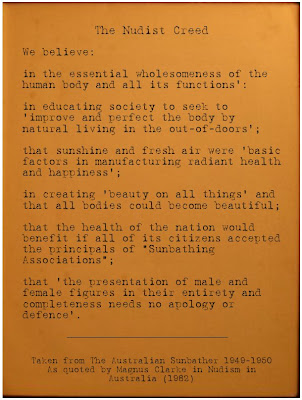 Contrast this with the International Naturists Society’s definition of Naturism adopted by the 14th Congress in 1974.
Naturism/(Nudism*) is :
“ a lifestyle in harmony with nature, expressed through social nudity, and characterised by self-respect of people with different opinions and of the environment.”
*[I will have separate article of the differences and commonality of these two terms.]
The predominant feeling in the book seems to be that Nudism rather than something that one believes is more something that one does!
Speaking from my own experience this very much is a personal disposition and the experience of removing ones clothing in a mixed social setting, can be a simple or a life changing experience depending on ones own state of being.
For others while it may be a psychological release and newfound freedom they do not articulate it that way instead just revel in the feelings and enjoy, and rightfully so!
What ever the impact on the individual, social nudity is a powerful sociological force and some will wish to ascribe a philosophy to it.
Historically we have seen the importation of a German model that had its focus on group physical fitness, a vegetarian diet with a prohibition on tobacco and alcohol.
Other clubs adopted a more Greek and Olympian theme on which to base their club and gatherings without the more rigorous mandate on diet etc.
Finally over time we see a blended version of all these thoughts that came to pass with a focus on leisure, organised games and the social activities of BBQs and alcohol accepted (in moderation) accepted as just as important part of the Nudist lifestyle.
This of course reflected the changes in society attitudes outside of the movement, the changing work patterns in Australia and an increase in general affluence.
Until next time:

Posted by Sunkissed at 1:56 PM No comments: