Depressing fact: 6 out of 10 women hate their naked bodies 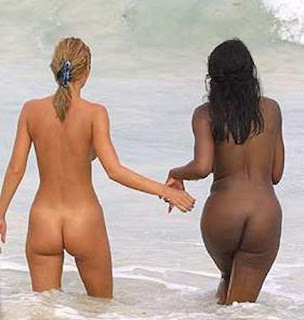 The following article gives another reason for the wider promotion of the Naturist lifestyle with its respect for self and others that it fosters.

If one spends any time in a Naturist environment and it is clear that we are all fundamentally the same. What is this image that we are supposed to compare ourselves to? Is it the digitally enhanced photos of the female form that adorn the covers of magazines? If so we are comparing ourselves to a lie!

Body size and the presence of cellulite is immaterial!

Who says that a woman who has had children needs to have the stomach tone of a teenager?  I'll wager it is a company that has a product that they will tell you can solve this non-existent problem!

And men you are not immune to this body image lie either, we are all being conned!

Advertisers are creating in us insecurities and then selling us "Snake -Oil" to make us feel better about ourselves. But not too much better however, as they want us to keep coming back to the products time ($) and time ($) again.

Here is the article:

Six out of ten women have confessed they hate the sight of their naked body, a study has revealed.

In a truly sad and depressing fact, a poll found that the majority of British women are uncomfortable seeing themselves being naked, with many feeling uneasy even in front of their partners.

More than four out of ten women don't like their other half to see them naked because they are too embarrassed by their appearance.

The same number of women also said they avoid mirrors and don't own a full length one as it makes them depressed.

This is terrible ladies!

The survey carried out by Rosemary Conley Diet & Fitness Clubs found that the biggest complaints were saggy tummies, love handles, being overweight in general or cellulite.

33% of those asked said they felt losing weight would make them feel better – with 11 pounds being the magic figure.

A third of the 2,000 women polled also said their love lives had been affected because of their confidence issues.
From:http://uk.lifestyle.yahoo.com/depressing-fact-6-10-women-hate-naked-bodies-103013509.html
Posted by Sunkissed at 5:05 PM